Are We Losing Music? Part One: “Sibelius®” (or “Yes, This Is a Screed Against Everyone’s Favorite Notation Software, But Someone Needs to Say It!”)

At the risk of sounding like so many of those who have come before and been on the wrong side of history (I’m talkin’ ’bout you, guy who said music was dead in the 14th century!), I’m going to come right out and say it: Sibelius is killing music.

OK, fine—I probably shouldn’t blame one music notation software program for all the ills in contemporary music, but it sure is tempting. You see, from my perspective as an educator, I come into contact with the music of young composers all the time, almost all of which is conceived of, composed, and notated on Sibelius (though there are some throwback types out there who still prefer Finale). What I see on a routine basis at first shocks, then horrifies, and ultimately saddens me, causing nearly every post-teaching train commute home to be a blue affair.

Let’s do this in an unconventional way. Any performing musician out there who comes into contact with new work knows everything I’m going to say already—these are the complaints I get to entertain from my colleagues whenever they have to play a poorly notated and/or copied part—so I am going to aim this at young composers. Rather than showing a bunch of mistakes, let’s begin with an example of something that is correct.

This score sample is from Weber’s Overture to Euryanthe. Don’t know it? That’s another problem which I’ll address in an upcoming blog post, “Nobody Who’s Writing Music These Days Has Heard any Actual Music.” 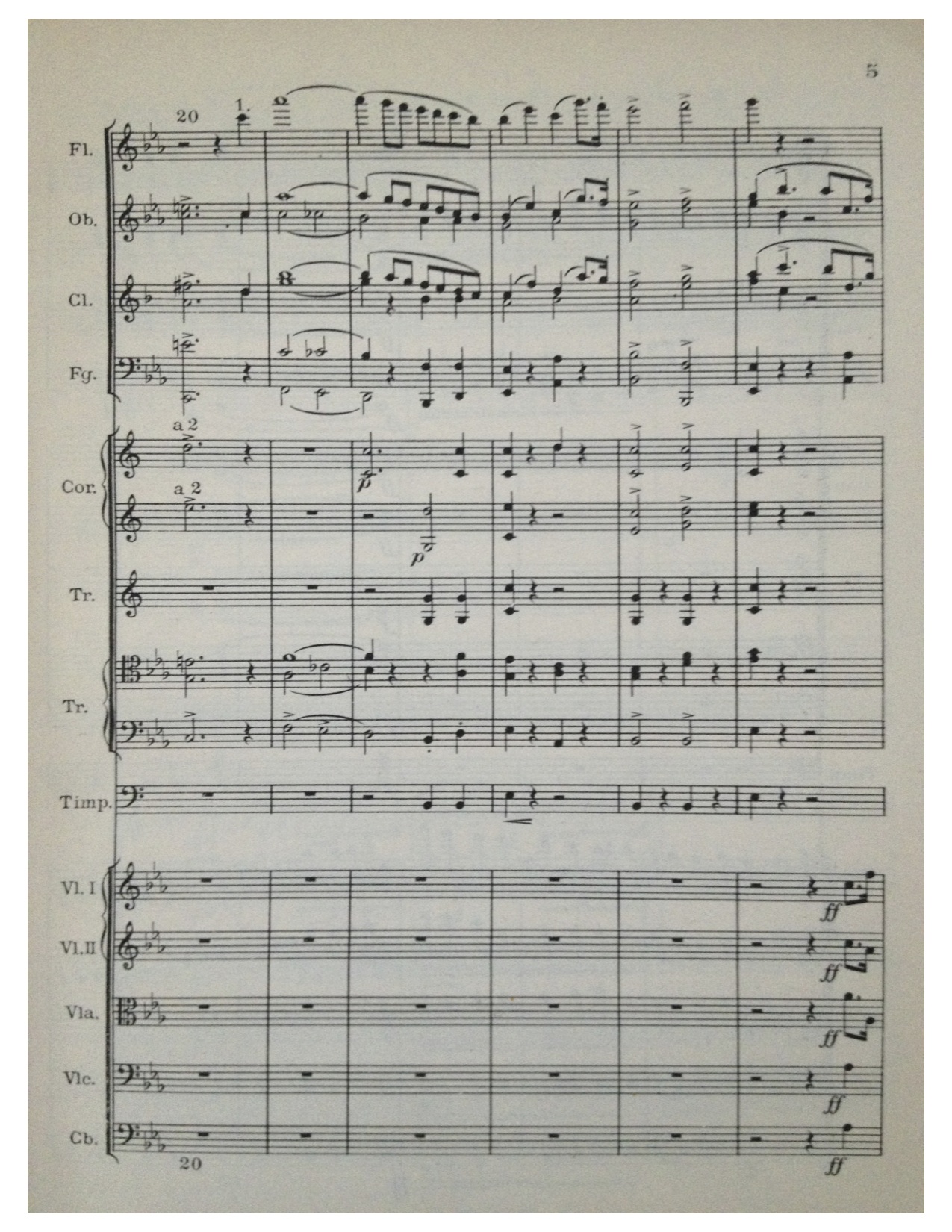 Let’s start in the margin. See those abbreviations? They tell a conductor (or anyone else who might be interested in reading the score) who’s playing what—pretty simple stuff. Sibelius does this automatically. The problem is, you should be able to tell how many of which kind of instrument are playing. From the looks of it, it would appear that there is only one flute, for example. After all, it’s marked “Fl.” which is the abbreviation for “flute,” right? Wrong!!! This is in Italian! That’s a whole ‘nother language!!! (Those Italians are amazing, you know—they have a word for everything!) This is actually an abbreviation for flauti: flutes. If you’re reading this score to learn how your scores ought to look, you might infer that the singular form is appropriate, even if you’re using two flutes. However, that would be incorrect. If you’re reading this blog post in English, then you should use the English plural equivalent in your own score: “Fls.” If you’re fancy with the software, then you could also indicate “Fl. 1&2” or, better still:

(Aside: There’s actually a mistake in the abbreviations on this page. Can you spot it?)

That’s the easy stuff. So let’s move on.

We’ll stick with the flutes:

There’s a handy little “1.” marked in the first measure (which happens to be m. 20, which I’ll explain in another blog post, “How to Use Measure Numbers, ‘Cause You’ve Been Doing It Wrong Your Whole Life”). This tells the reader that this music is to be played only by Fl. 1. When does it end? Well, that should be obvious if you turn the page, for in the next flute entrance, there are two voices. However, if that solo were to continue to the next page, a courtesy “1.” or “(1.)” would be ideal, lest there be any confusion. Of course, since this is actual published music, the publishers laid out the pagination in such a manner that this passage fits handily on a single staff system, which is yet another blog post, “How to Make Your Music Look as if It Were Put Together by a Human Being.”

Look at the oboes (that’s oboi—see above); so many marvelous things here. The passage begins with a chord, notes stemmed together indicating Ob. 1 on top, Ob. 2 below—the natural order of things. Then look at the unison on the fourth beat (we are in 4/4 meter here): two stems. Then—Lo and behold!—separate voices in the following bar! This is a necessity owing to the contrapuntal nature of the parts. These would need to be disentangled and extracted when going into the individual players’ parts. To do otherwise is a crime against Art (which leads me to my next blog post, “Your Music Doesn’t Need to Be Written Like an Aerosmith Back-up String Pad Just So the Parts Are Easier to Print, Thereby Committing a Crime Against Art”).

What else do we notice?

Ah, yes, the “a 2” (a due) marking in the horns. That’s instructive! That tells the conductor that those guys are playing in unison. But it also means that some actual thought went into putting it there, what some might call “orch-es-tra-tion.”

Here’s one more thing that Sibelius seems hell-bent on ruining for countless generations of musicians to come: rests. I’ll usually spend a good 20 minutes per composition lesson just getting my students’ rests to look right. So allow me to point out the following:

This is how a rest for three beats in 4/4 meter should look. Note that it is not a dotted half rest! Those only work in meters in which you can count a single beat or a combination of whole beats using a dotted note value, such as 6/4 or 12/8, etc. Never use a dotted half rest in 4/4, and never use a half rest in 3/4. I know, I know. It’s confusing. But there’s an easy way to figure these things out. It’s called, “Look at Some Scores!“

Finally, and this is an admittedly much larger topic, let’s look at the last measure of the excerpt (m. 25) in the oboes and clarinets:

Here we see the separate voices clearly indicated, especially the half rest in the lower parts. (Notice how the rest is placed on the second line of the staff so as not to collide with the upper voice.) Examine closely the upper-voice rhythm. I could go on and on about this, but I’ll spare you the pedantry (sort of). Simply put, Sibelius would not do it this way by default. If one were to enter these exact notes into Sibelius, I imagine it would come out quite differently, with the first eighth having a separate flag not beamed to the last beat. The reason for this particular beaming has to do with several things, primarily the consistency of the eighth-note beaming throughout the score, which is uniformly in groups of four, not two. This, in turn, is an expression of the tempo, which Weber indicates as half note = 92. But it is also a reflection of the nature of the line, which is smooth while at the same time syncopated. Again, there’s thought behind the notation. Weber (and his publishers) knew, as should we all, that the mere appearance of the music is enough to suggest to the performer the desired sound. Pitch and rhythm are not enough. The context is as important, if not more so, than the notes. After all, an incorrect pitch is easily fixed; an incorrect rhythm, however, requires some serious plastic surgery to fix.

Up next, Part Two: “This Sounded Different When I Played it Back on My Computer.”

This entry was posted in Composing. Bookmark the permalink.

2 Responses to Are We Losing Music? Part One: “Sibelius®” (or “Yes, This Is a Screed Against Everyone’s Favorite Notation Software, But Someone Needs to Say It!”)